by Vintage Tree Care on Jun 7 in Tree Care 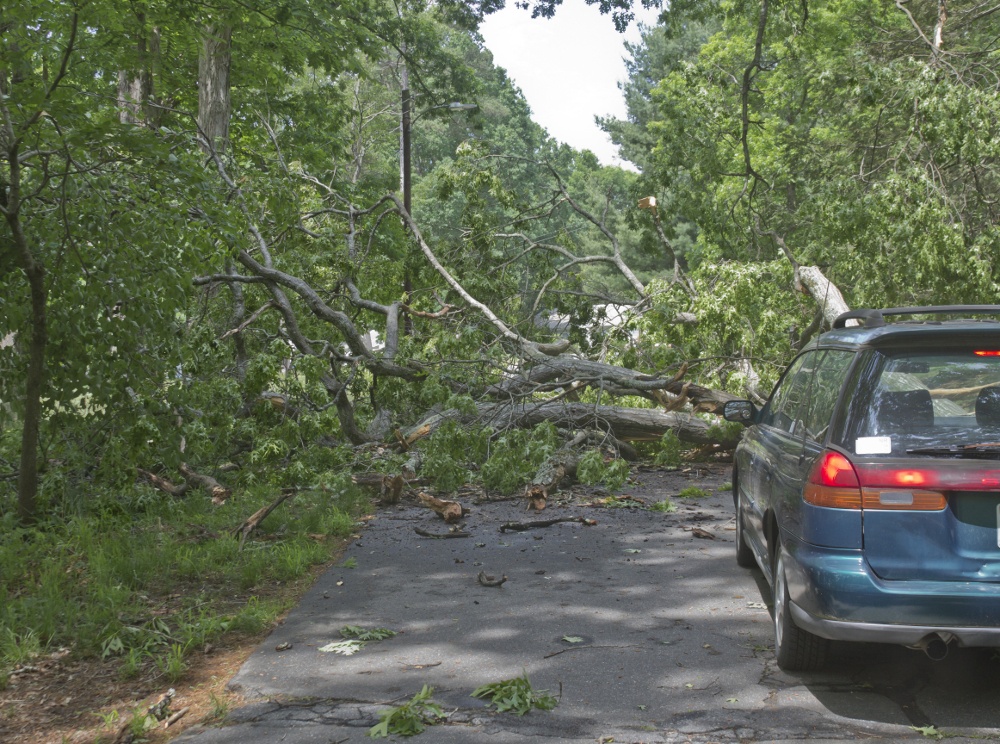 A Mysterious and Dangerous Phenomenon

Vintage Tree Care has been taking care of trees in Sonoma County for a long time.

One phenomenon that we’ve found to be particularly dangerous due to its (seemingly) random nature is summer limb drop.

People have documented summer limb drop for a very long time. However, the true cause is still not fully understood. The cause of summer limb drop may actually lie in a few different factors (which may or may not occur in tandem).

First, we have evapotranspiration (or just transpiration). This is a fancy term to describe the process of trees sweating.

On a really hot day, a large tree can draw up an enormous amount of water from its roots and trunk into its limbs. This water is intended to cool the tree as the moisture is released through the leaves. You can very easily observe this process by placing a plastic bag around a plant—condensation appears on the surface of the bag as the plant sweats.

With a very large limb on a hot enough day, a surprising amount of water can be drawn up by the tree. All of this water weighs a lot, increasing stresses on the limb and potentially breaking it outright.

This stress can be increased by other factors, including an existing defect or flaw, wind, or even infection. Any combination of these factors may be too much for the limb to handle, causing it to drop.

Preexisting limb defects are not usually what arborists associate with sudden limb drop. However, if the defect is minor enough (or even undetectable), an arborist may not recognize it as an immediate threat.

Even minor limb defects can worsen slowly over the years, increasing in severity until eventually becoming dangerous. Something as small as a woodpecker or squirrel may have created a defect that eventually leads to the death of the limb, whether via gradual worsening of a crack or via decay.

A decaying limb might also be a good ingress for infection.

It’s been posited that an infection in the limb may be another factor that leads to summer limb drop. If the infection causes excess gases to be released in the limb, it may eventually lead to an increased internal pressure, weakening the limb’s structure and, in turn, causing its failure.

A generally weakened cell structure in a limb can also lead to sudden failure.

Reduced evapotranspiration can come as the result of a drought (like the one California is still experiencing), or just the normal summer rain decrease, cutting off the limb’s normal access to water. In this weakened state, a slight breeze (or even no breeze at all) might cause the limb to drop.

On the other hand, increased evapotranspiration after a period where it was missing can have the same catastrophic effect. A rainy day after a drought may be exactly what a tree needs, but might spell the end for one of its limbs. The increased load from newly gathered water on already weakened cells may cause the limb to drop.

If there’s a mature tree on your property, you might want to consider the possibility of summer limb drop.

Though it can be difficult to predict, there are steps to take to both spot warning signs and reduce the chance it will happen to your tree.

The first thing to consider is that, generally, summer limb drop occurs in mature trees with large limbs. This doesn’t mean it won’t happen to other trees, though. The situation is most dangerous with larger trees, which can seriously injure people or damage property.

A great preemptive measure to take is to have a certified arborist inspect your tree. For many dangerous flaws, most people wouldn’t even notice something wrong. An arborist can identify flaws that may be dangerous anywhere from 1-10 years into the future. You should always watch out for discoloration and visible cracking, as these can cause serious issues down the line.

Properly pruning the tree can also help. Excess foliage, a compromised limb, and a hot day might mean a big problem. Incorrect pruning (or complete lack of pruning) is also something that an arborist can quickly identify and then correct.

If you’re unsure how your trees are holding up or you’re concerned that something might be seriously wrong, give Vintage Tree Care a call. We’ve been helping the residents of Sonoma County keep their trees happy, healthy, and safe for years.

Fill out the form below to get in touch with a certified arborist in Sonoma County!

The comments are closed.

* Some restrictions may apply

Simply an excellent experience, all the way around. Fred came by and gave an estimate to do some thinning, shaping and trimming of the Japanese Maples and...

I am going to add yet another 5 star review to this great business. Every part of the experience from the first consultation, quotation and scheduling to...